A Tale of Two Print Adversaries: HP and Xerox

A Tale of Two Print Adversaries: HP and Xerox

Overall, the deal should translate to a range of new revenue/profit growth opportunities for both manufacturers, while potentially undermining Xerox’s existing OEM partnership with Fuji Xerox (aka the dramatic twist). The aspects of the HP and Xerox partnership are expected to start rolling out in the second half of this year and could prove to have a fundamental impact on the print industry.

How does this Strategically Impact HP and Xerox?

The HP and Xerox announcement is most notable for the new OEM partnership arrangement where HP will provide Xerox with A4 as well as entry-level A3 engines that leverage HP’s acquired Samsung technology. The relationship essentially builds on the existing OEM partnership that Xerox established with Samsung in roughly 2004 that started with Xerox’s low-end A4 monochrome Phaser and WorkCentre models and eventually spanned the majority of Xerox’s A4 lineup. Although the announcement doesn’t specify the exact models that are part of the deal, the verbiage suggests that the move will certainly affect the current OEM relationship between Xerox and Fuji Xerox, while giving Xerox leverage in future negotiations with Fuji Xerox.

More than 80% of Xerox’s US-based product portfolio, sold through both transactional and contractual channels, is comprised of engines sourced from Fuji Xerox. The new agreement terms will see a portion of those models (the A3 and A4 small workteam and workgroup lines) move to HP’s Samsung-based engines. Although speculative, the partnership could also lead to a larger change in Xerox’s portfolio strategy to source future products up to 60ppm (where Samsung caps its lineup) from HP exclusively, in a move that would have a significant impact on Fuji Xerox’s revenue in western markets.

The other parts of the deal are a lot less straightforward.

With regards to the supplies side of the Xerox and HP partnership, Xerox will be supplying toner to HP for the Xerox-branded Samsung-based A3 and A4 devices as well as for certain undisclosed HP-branded devices. It makes sense that Xerox would OEM toner for its own branded devices, but it’s rather unusual that the company would additionally provide toner for HP’s devices that HP is capable of manufacturing in-house and would likely want the revenue stream of. Nonetheless, this arrangement enables Xerox to capture the most profitable side of the business with the long-term revenue stream provided by supplies sales. It’s unclear at this time if this business model mimics the existing Xerox/Samsung OEM relationship, but the strategy may ultimately help improve Xerox’s financial performance from its recent 12.7% year-over-year decrease in supplies sales (and one of its worst quarterly results in recent memory) in its fiscal Q1 FY2019 earnings. 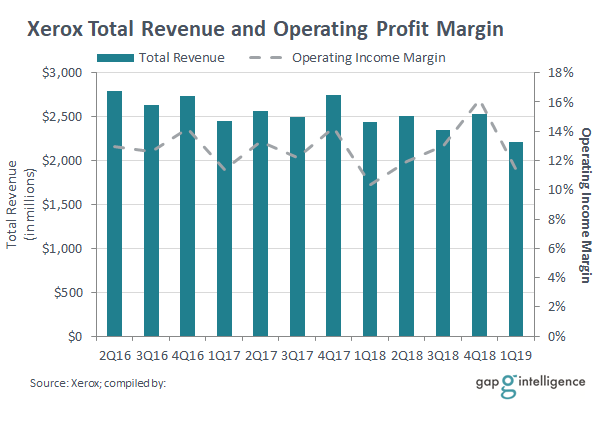 Lastly, as part of the deal, Xerox will become a DaaS specialist within HP’s Partner First program, leveraging Xerox’s service capabilities and network within the SMB market. HP’s DaaS provides PC leases coupled with HP’s TechPulse software for proactive monitoring/detection of device issues. Xerox will additionally serve as an authorized reseller of HP PCs, displays, and accessories, expanding its portfolio offering to its commercial customers. In exchange, HP will expand its offering by adding Xerox’s cloud-based DocuShare Flex content management platform as an available option on its commercial PCs distributed in the US. The aforementioned aspects of the agreement enable HP to leverage Xerox’s strong reseller network, while strengthening Xerox’s IT-related portfolio and providing growth opportunities in new markets. It’s important to note that Xerox, however, is completely unproven as a PC reseller, despite its strong B2B channel.

What Industry and Competitive Implications will this Deal Present?

Xerox’s new OEM partnership with HP isn’t as surprising today as it would have been a decade ago, understanding that the failed merger between Xerox and Fuji Xerox last year created major tensions between the two companies. These issues intensified over the past year as John Visentin, Xerox’s Vice Chairman and CEO, has been rumored to be actively pursuing opportunities to gain control over its relationship with Fuji Xerox. The announcement surely wasn’t viewed positively by Fuji Xerox.

Although Xerox has no experience selling PCs and displays, the addition of these products and HP’s DaaS offering enable Xerox to enter new markets and leverage its reseller relationships. The expanded business segments could improve Xerox’s financial progress in line with its three-year strategic plan announced earlier this year as it looks to drive growth within its core business (printers/copiers) and capitalize on opportunities in adjacent markets and services.

From the HP perspective, the partnership demonstrates that HP is further investing in its A4 Samsung-based lineup (beyond its recently announced A4 Laser branded devices) and marks the vendor’s first opportunity to capture OEM revenue from its acquired technology. This is a significant change from a company that’s sourced its own business printers and MFPs from OEMs (namely Canon) throughout its history. This investment may not immediately affect HP’s OEM relationship with Canon, but should be an alarming signal for Canon looking ahead, particularly as HP continues to develop and innovate its inkjet and Samsung-based technology.

As speculated roughly a year ago and understanding HP’s financial health, this deal with Xerox could also suggest that HP may be interested in eventually acquiring Xerox with this partnership serving as initial steps towards that transaction. As with HP’s purchase of Samsung’s printing business, OEM agreements have the potential to turn into acquisitions. Should this come to fruition, HP would gain access to Xerox’s strong direct and reseller/dealer channels as well as its flagship ConnectKey technology, largely enhancing HP’s current software platform and app offering. Still at least for now, it’s more accurate to view this deal for what it is, rather than what it might precede.

The HP and Xerox partnership represents Xerox’s willingness to aggressively pursue its strategic goals (investment in core business, achieve flat or growing revenue, and market expansion) through establishing new partnerships and targeting new business opportunities. The agreement is based upon the existing Xerox/Samsung A4 OEM partnership, while expanding the relationship into new segments. For HP, the partnership creates incremental revenue/profit opportunities with its Samsung engine technology as well as strengthening its reseller network for PCs and DaaS. For Xerox, the vendor has the potential to improve its supplies revenue by supplying toner for the new portfolio, give it more leverage/options for hardware sourcing, as well as expand its presence in the IT solutions business. Although the timeline for the new Samsung-based Xerox-branded devices was not disclosed, it’s expected that the reseller portions of the partnership will go into effect in the second half of the year.

Looking ahead, it’s unclear what the exact implications of this new partnership will translate to industry-wide, but at this time, the agreement serves as a reminder that even in a long-standing mature market, even rivals can team up.

About the Author: Lisa Caffrey