Advice On How To Buy The Contraption That Gives Us Internet.

Advice On How To Buy The Contraption That Gives Us Internet.

Did you see that post on Instagram? Go look now it’s super juicy! Oh, your page isn’t loading because your WiFi is slow? Well lucky for you, I know that gap intelligence tracks Wireless Routers pricing and promotional data and there’s plenty of reasons why you should upgrade your old router for a faster and more reliable one!

First, what is the difference between a router and a cable modem?
In the simplest terms, a router gives you internet access between networks in your home and the cable modem connects your home to the internet. Some routers have both built in while others you have to buy separately. The important part is to identify if you want a wireless router or if you want a wired router that you connect with an Ethernet port. But since I research only wireless routers, that’s what you’re buying!

Another important decision regarding what kind of router you want is if you want a mesh router or a traditional router. No I’m not talking about mesh fabric. A traditional router is what you typically see in store; the black thing that looks like a spider with its legs up in the air. These spider legs are called “antennas” and provides a better connection whether it is built externally or internally. Mesh routers, however, are little pods that can be placed around your house that extends the range signal to provide faster internet throughout your house. This is still a pretty new concept that only a few companies have taken lead with. For example, some big brands including Google, Linksys, Asus, D-Link, eero, and Netgear all have mesh routers that have made a big impact in the router world. Although mesh routers are pricier than traditional ones, it’s mostly an investment that will last you years.

WiFi speed, is it worth the extra money?

Well to answer this question I have to follow up with another question, how patient are you? If you’re like me and you have zero patience for technology, then get the fastest speed. The fastest and most common wireless standard, which is cohesive with speed, is AC. You don’t need to know what this means, just know it’s the most up-to-date wireless standard that will most likely give you a better and faster connection. Until  November 12th came when Netgear launched its newest wireless standard X. For example, the Nighthawk AX6000 gives you a wireless speed of 6000 megabits per second and is just as it sounds…pretty fast! The Nighthawk AX6000 started at a whopping $400 and has a new sleek design that no longer includes antennas, but more like something you would see in Star Wars. Gaming is another factoring decision on what type of router to buy. If you’re a gamer, there are specific routers (that I would definitely recommend researching) you can buy that will prevent the lag that comes with crummy internet speed.

So, what’s the router for you?

Here is my in-depth analysis about which router is right for you.
If you live in an apartment, stick to a simple traditional router. You don’t need to worry about the range extending any further than your apartment, so any router with an AC wireless standard should suffice.
If you live in a two-story house or a bigger house in general, I recommend investing in a mesh system. Now while there are extenders and plug-ins that you can buy additionally with your traditional router, buying a three-pack mesh system will do the same job and chances are you’ll get a better deal.
There are also many other features like voice assistance, Bluetooth, and app control that can make your house “smart” by functioning off your phone or your voice. So, if you’re interested in extra features, be sure to include that in your search.

Luckily, there are a good amount of routers that are affordable, while others require a little extra fluff in your wallet. The chart below shows Wireless Routers price band across these retailers. If you’re wanting something more on the cheaper side, Walmart, Target, and Office Depot would be your go-to spots. They carry a wide assortment of routers and all are affordable. However, if you’re looking for a more reliable investment, Best Buy is your store. Best buy has wider price bands but it also focuses more on premium brands. Club stores such as Costco and Sam’s Club only carry a few routers that have the same $100-$199 price band so that would narrow your choices down if you’re still confused. 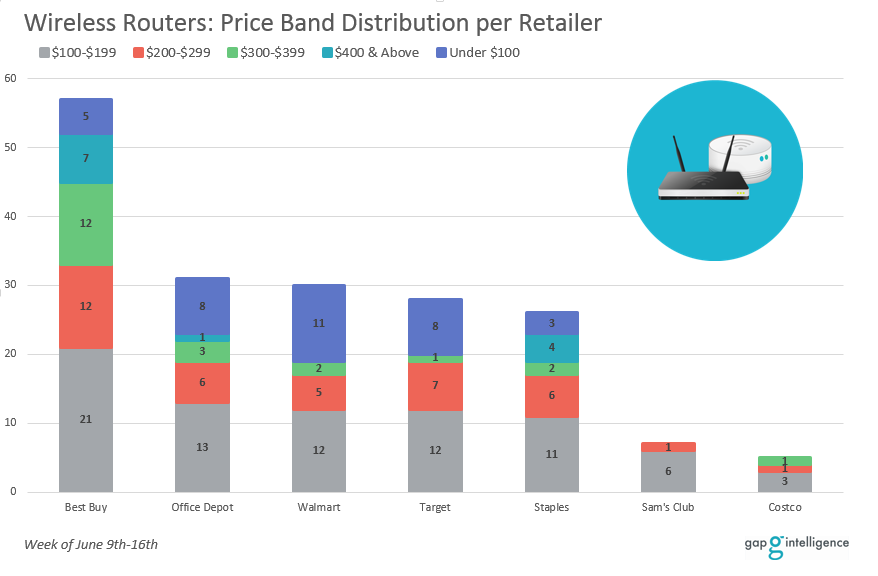 Hope you found this helpful as you commit to buying a router that suits your social media lifestyle.

About the Author: Stefani Zaki