Unless you have been living under a rock, you probably were inundated with promotions surrounding Amazon Prime Day throughout the past few weeks. The 48-hour event officially took place on Monday, July 15-Tuesday July 16. However, many Amazon shoppers saw Prime Day deals showing up as early as Saturday, July 13. This year marked the fifth annual Prime Day, which has seen expansion each and every year since its creation in July 2015. Amazon essentially created a shopping holiday in the middle of summer, which was historically known to be among the slower shopping seasons of the year. Not only has the length and promotion around Prime Day increased but the actual deals have improved. In the past, Prime Day featured a collection of random deals on less-than-desirable products. In 2019, however, Amazon and brands selling through the major online reseller, took advantage of the growing fanfare that surrounds Prime Day.

Amazon Continues to Make its Mark

You can visit a number of sites to see what the best deals were but here, I want to talk about the phenomenon that is Prime Day. What Amazon has managed to do demonstrates the reseller’s power and stature in the world of commerce. In today’s day and age where Fear of Missing Out (FOMO) is a daily event for many people, thanks to the wonderful world of social media, Amazon created demand where it didn’t exist before. It found a way to create, out of nearly nothing, another major shopping period outside of Black Friday for a number of product categories. In the US, Amazon is considered the de facto place to find anything you would ever need and everything you never knew you needed. Couple that with a giant sale, and the possibilities are seemingly endless. 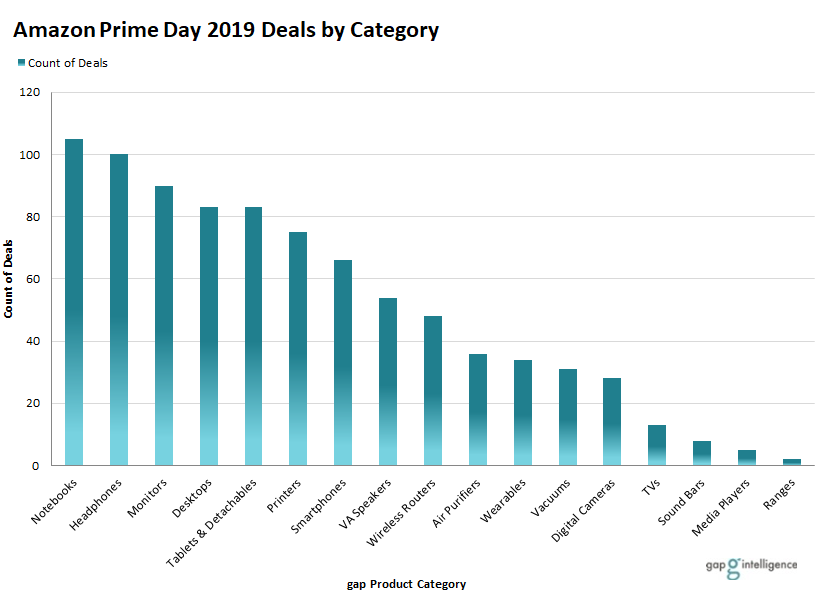 gap intelligence’s collection methodology included four unique crawls. The first crawl, unsurprisingly, resulted in the highest number of unique deals. Duplicate deals were removed from subsequent collections leaving the 12 am Tuesday crawl to result in fewer unique deals. However, by Tuesday at 11 am, the number of unique deals did increase once again. Amazon released an increase in deals at peak search times, aiming to capture the largest audience at any given time throughout the 48-hour event. While Amazon Prime Day began as a 24-hour flash sale, it is now pushing the 48-hour mark. Just like Black Friday began as a one-day shopping extravaganza and has now extended into what seems like a full month of shopping deals, Amazon is likely to continue to expand its limited-offering sales in future years. So, Amazon promoted a bunch of deals…so what? Well, if you are any other retailer, you also now have the opportunity to take advantage of shoppers’ openness to purchase and can aim to compete directly with one of the most advertised sales events of the year. A number of competing online merchants participated in their own version of Prime Day and hosted exclusive sales on those same days including Target, Best Buy, and Walmart. In addition to electronics chains, Macy’s, Old Navy, and Fabletics all offered significant deals for clothing. Nordstrom’s very hyped semi-annual sale also falls during Prime Day, which is touted by every major fashion influencer, along with Amazon alternatives to the trendy fall garb. Even more, telling is that Rakuten, a cash-back site (and e-commerce merchant) offered significant additional cash-back offers at many associated retailers and promoted Prime Day as a popup to all site visitors.

What is Amazon’s Actual Goal?

While competing resellers aimed to increase sales, Amazon had alternative motivation for creating and expanding its Prime Day. Ultimately, Amazon is looking to lock in customer loyalty. To participate in Amazon Prime Day, shoppers must have a Prime account. Amazon made it very easy for non-Prime shoppers to join the event, by extending a free 30-day trial prior to the $99 per year service. With this strategy, customers could technically cancel their Prime membership before the trial expiration, while still taking advantage of the Prime Day deals. This is another tactic in instilling major FOMO for consumers nationwide. Amazon undoubtedly locked in thousands of new Prime members that enjoyed the perks of the service, some that may forget to cancel their membership, and others that may just get a taste of the ease that Amazon offers. Amazon didn’t stop at just creating a shopping event, it further promoted and pushed other elements of its business including Amazon Music with its Prime Day concert, which featured major artists including Taylor Swift, Dua Lipa, SZA, and Becky G. Prime Day members could live-stream the concert or replay the concert for a forthcoming limited time.

Despite Amazon Prime Day’s primarily positive reviews and heavy media attention, some people were against the event altogether. According to a story from CNET, many people tweeted about their intentions to boycott Amazon Prime Day altogether. The information was gathered from a product review site called My Daily Dose, and according to the report, Minnesota had the highest tweet frequency of people sharing their intentions to skip the newly formed shopping extravaganza. The location was not surprising as it is home to one of Amazon’s warehouses, where workers were planning a six-hour strike during Prime Day in an effort to get better working conditions and protections (according to a Bloomberg report). Other cities among the top ten resisting Prime Day included New York, Rhode Island, Vermont, New Hampshire, Washington, Oregon, Massachusetts, Maine, and South Dakota. 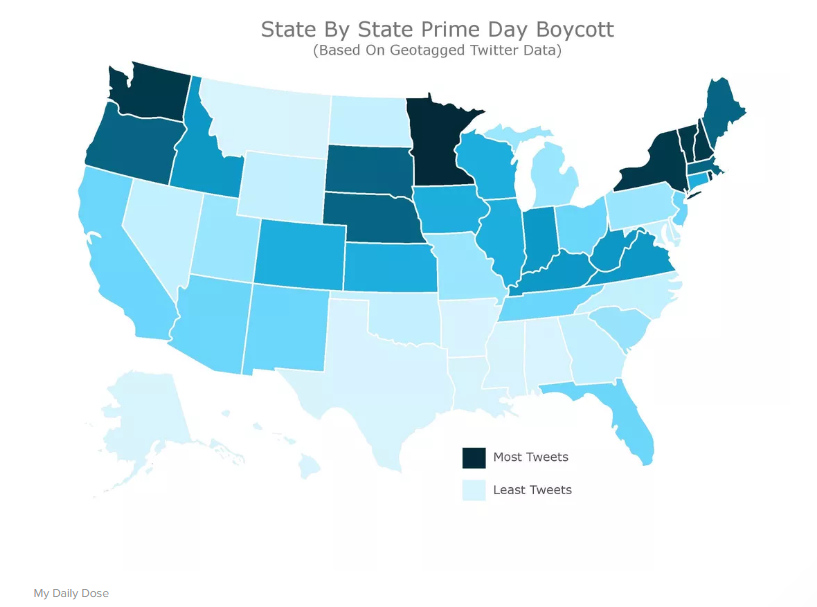 As Amazon increases its efficiency and its promise to needy customers to get their packages to them within an increasingly narrow time frame, workers are finding their conditions to be beyond demanding. From a consumer perspective, this may not be something that is top of mind and Amazon warehouse workers knew that Amazon Prime Day would not only be exceedingly demanding but also a very visible day where their protests would be heard louder than any other day.

Whether you love it or hate it, Amazon Prime Day is not going anywhere and if anything, it is expected to grow even bigger in the coming years. The massive online merchant has managed to create yet another shopping season in the middle of the year, potentially giving some brands the opportunity to get in the black far before Black Friday ever hits.

About the Author: Sarina Reuschle