Are TVs Becoming the Next Washing Machines in Germany?

Are TVs Becoming the Next Washing Machines in Germany?

Although TVs still are among the top categories when it comes to revenue, it would appear as if they are undergoing a similar development that washing machines went through a few years ago.

In the recent past, TVs were high-tech products that needed a certain level of hands-on help at the store in order to outline their advanced features. But with (comparably) stable prices, TVs are becoming more like affordable “convenience” products than luxury goods.

In our previous blog we already reported about the CV19 effect on TV advertisements, which showed how retailers are pushing the purchases of secondary TVs to satisfy the demand of households during cocooning. Simplifying this data by saying that this is just a short-term effect on the market would be ignoring the whole picture. What we are witnessing is an acceleration of a general trend from the past few years. 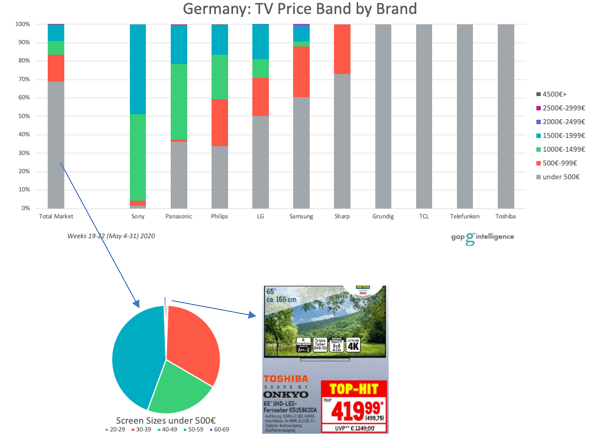 Last month, we saw that more than two thirds of all ads for TVs were priced under 500€. For a couple of brands, this was the sole price bracket for promoted TV models. However, just because the TVs are cheaper doesn’t mean they are smaller. Nearly 45% of those TVs had a screen size of 50”+, including a couple of 65” UHD models for less than 500€.

Although most of the ads for TVs have been done by Hypermarket/CC merchants, other retailers have also begun promoting such as Lidl, Rewe, and Penny. Additionally, we see not only trade brands, but some major players apparently searching for alternative distribution channels besides traditional electro merchants. These moves toward more diverse advertising and distribution opportunities mirrors what happened to washing machines some years ago. As we look ahead, we can expect to see increased commodification of the TV market as brands continue along the current path.

About the Author: Karsten Holdorf

Karsten Holdorf serves as Managing Director for gap intelligence GmbH, a subsidiary of gap International Inc., the expert for causal data. With more than 20 years of experience in trade marketing analysis, he supports clients in understanding the "why".