Every morning I walk down my driveway to retrieve the day’s copy of the Fort Worth Star-Telegram and bring it inside to scour it for the printed retail circular advertisements. In recent memory the paper has been quite thin and there haven’t been many printed ads. However, shortly after the country was beginning to see effects of the coronavirus, I began noticing the paper was getting even lighter and lighter. Similarly, I was finding fewer ads online on retailer’s websites. It was easy to realize that this pandemic was having a big impact on retail advertisements, both printed and online.

I began seeing large and abrupt changes to the way national retailers were releasing advertisements, if they were releasing them at all. Club stores were undergoing obvious changes as well, along with even some of the more regional stores. I decided to do a month over month comparison to help understand how the actual numbers of advertisements that gap tracks has been affected and noticed that the drop-off in March, April, and May of 2020 compared to the same months last year is a bit astounding.

The chart below contains all retailers we’ve tracked advertisements from during both 2019 and 2020, with the exception of Best Buy. Best Buy has actually seen an increase in ads compared to a year ago because of a major change in its methodology surrounding advertisements (more on this to follow). Interestingly, January 2020 started off with more advertisements compared to the same month last year. In February the numbers dropped slightly below last year’s level and then March through May experienced significant declines in comparison to the numbers from the same months in 2019.

As you can see, ad counts for the last three months have gone down drastically compared to this time a year ago. Each retailer has had to figure out how to navigate this unchartered territory. Below I have outlined some of the changes gap has observed in the past several months for many specific retailers.

Nearly all the major national retailers that gap tracks have undergone some very large changes.

Target has historically printed a Sunday ad and released it in the newspaper every single week. The retailer has typically also published additional online only pages that it dispersed amongst the print pages to be displayed within the weekly ad section on its website. However, since late March, Target has released its ad strictly online and the ad for the week of March 29 had no gap tracked categories for the first time in recent memory.

Walmart has been steady in its release of an ad roughly twice a month, but in the last two months the retailer’s ads have contained notably fewer products that gap tracks compared to last year during the same period – including zero gap tracked ads for the month of May 2020. 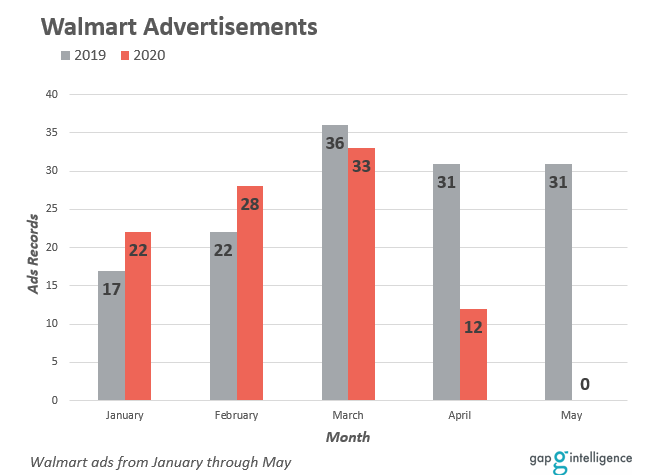 Staples, another retailer who was nearly guaranteed to have a new weekly ad every Sunday, took a one week break from releasing its ad the week of March 29 near the beginning of the outbreak. Since then, Staples’ ad has gone from roughly 15 online pages each week, often including 4-8 printed pages, to just a one- or two-page ad released only online.

Office Depot, who had also consistently released a weekly ad every week without fail for many years, has completely done away with their ad and has not released one since early April. Although, it should be noted that the retailer seems to be taking action similar to Best Buy and has changed its verbiage on the weekly ad page to note that it now is displaying “weekly deals” instead of having a weekly ad.

Home Depot did not have an active ad from March 30 through May 21 when it finally released a 12-page online only ad.

Lowe’s has not had an ad since March 25.

Kohl’s, which would normally have two ads each week that were sure to be included in the newspaper, has not had a single ad since March 29.

Best Buy is in contrast to the above retailers as it has been steady and consistent with the release of its ads. In August 2019 the retailer changed its ad from a roughly 40-page Sunday weekly ad to a twice-a-week “Top Deals” ad located only on the website. Best Buy has not missed a beat and continues to release its new deals on Bestbuy.com regularly.

Not surprisingly, the three club stores that we track have also undergone some changes to the way they are advertising on a regular basis.

Costco halted the printing of its “Member-Only Savings” booklets for the past two months and has displayed deals solely on its website.

BJs Wholesale Club announced in April that it was doing away with coupons that shoppers must cut out and bring into the store, and instead has switched over to clipless coupons for its sale items. The store is however still printing its ad which typically comes out twice a month. 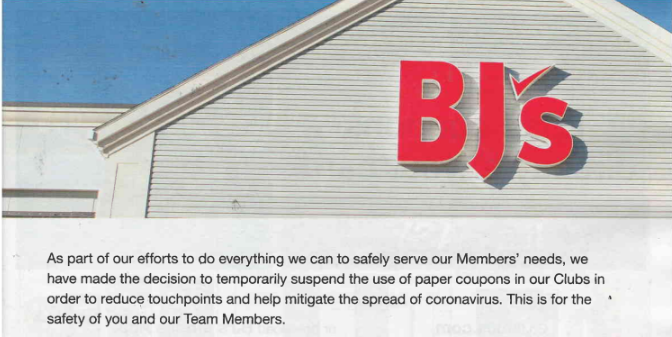 Sams Club last released one of its regular “Instant Savings” booklets back in February which ran through March 22 and has yet to release one since.

For whatever reason, a large portion of the regional retailers that we track ads for, such as ABC Warehouse, BrandsMart, Meijer and Menards, have seemed to be less effected in their advertising over the past two months. Most are releasing their ads like they always have. Notably, BrandsMart underwent a similar change to Best Buy in early March and has not missed an opportunity to refresh the “Top Deals” on its website ever since.

From an advertising standpoint, it will be very interesting to see what happens over the next few months ahead. Before the pandemic we had already started to see a trend of retailers moving their ads away from print and putting them more online. The past few months have seemed to expedite that trend and only time will tell if it begins to reverse itself with some of the stores reverting to their old way of advertising their products. I must say that I will be shocked if I never see a Target or Kohl’s ad in the newspaper again.

Editor’s Note: The following Sunday after this blog was written (May 31), Target included a print ad in the newspaper for the first time since March 22.