In the field of market research, gap intelligence has many competitors, but none as prominent as NPD in terms of the spectrum of categories that we monitor. However, both gap intelligence and NPD operate differently and have varying competitive advantages. NPD tracks sales volumes, measured in units and dollars, while gap intelligence tracks placements, measured in unique products available across channels. Therefore, instead of a competitor, we like to think of NPD as one of gap intelligence’s greatest complementors in the market (see what I did there?). Industry agents will use NPD’s valuable data as a resource for knowing what sold and at what price, which for today’s blog we will equate to knowing the score of a game. Sure scores are a great part of navigating casual conversation and water cooler interactions, but what about when you need to know more? How did those teams rack up their exact totals? Did they come from behind? What plays were noteworthy in the game? Was it one great move at the end that sealed victory? …or even defeat?

The reality is that many of gap intelligence’s clients are also current NPD clients and they use our data to interpret sales results and gain additional insights, if needed. Again, scores are fine, but for those that really need answers, we are here for you with the playbook. As coaches will tell you, it’s not just playing the game itself, it’s going back and studying the plays to reveal the root of what happened. The complementary score-to-playbook nature of NPD, and gap intelligence really, came through when I read one of NPD’s recent blogs about the unlocked smartphone market—which we write a lot about too! NPD showed a trended chart and reported that:

“Though the unlocked market was once dominated by devices priced under $400, models priced in the upper mid-tier and high-tier space (the $400+ category) grew from 29 percent to 48 percent in just two years.” 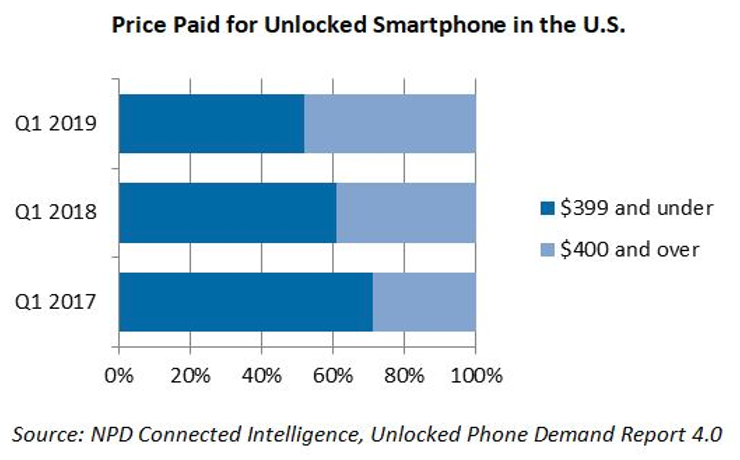 Knowing how complementary gap intelligence and NPD are, I immediately wondered how our data stacked up. Would it tell the same story? Turns out, yep… absolutely! Comparing NPD’s chart directly with gap intelligence data for the same time-frame tells an identical tale of high-end expansion in the unlocked segment. NPD’s chart reflects the share of smartphones sold in the US that fall into the two price categories, while gap intelligence’s chart shows the share of phones that are presented for US shoppers to purchase in those two price categories.

NPD reports that the $400+ category grew from 29% to 48% in two years, a gain of 19 points. gap intelligence reports that the same segment rose from 18% to 41% in two years, an increase of 23 points. Not too bad! Both of us peg the $400+ category between a seven-point range just under 50%, reflecting the close relationship between what retailers are stocking on their shelves and what consumers are buying.

What else could I learn by opening up the playbook?

Changing the 100% scale of the gap intelligence chart led to the first big reveal. While NPD was able to show that the share of unlocked smartphone sales was skewing toward the advanced $400+ category, plotting the data by placements tells a tale of consolidation in the unlocked market. A discouraging fact were it not for NPD’s quote about the segment’s increase of 22% to 46.5 million active users in Q1 2019. This means what remains is in fact selling better. 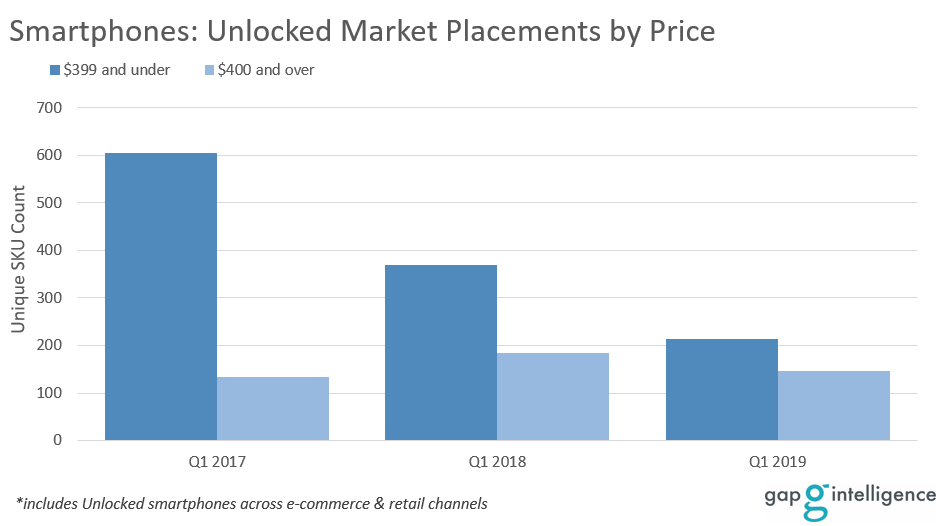 Interestingly, the segment’s decline is primarily felt by the $399 and under category, which saw options in the channel decline by 65% in two years (213 vs. 606 unique SKUs). This means that there are less budget-class items for buyers to even consider purchasing. It is no wonder more are gravitating toward the $400+ category, which has actually grown 11% since Q1 2017 (147 vs. 133 SKUs).

What brands are driving the unlocked smartphone market?

Looking at the $399 and under category of unlocked phones shows a major reduction in brand diversity with the list of 56 unique brands participating in the segment since 2017, trimmed down to 30 still active today. However, this is not the most interesting area to explore as the $400+ category is where strategic plays of value are being executed.

Like the budget rung, brand consolidation occurred in the $400+ category as well. The 21 unique smartphone brands that participated in the segment since 2017 faded to 15 this year, and entities like Samsung, Google, LG, Motorola, and CAT have steadily ramped up their participation by placing more of these items at merchants across the channel. Samsung leads the current $400+ category of unlocked smartphones, increasing its SKU count by 87% since 2017 to hold a dominant 48% share of the segment. So nearly half of the unlocked phones in a segment that NPD says represents nearly half of all sales in the US are Samsung options… that is a strong stance!

The story does not end there.

Going back to my previous point about “what remains is selling better,” NPD’s blog also reveals one last clue by noting that:

“…phones priced from $500 to $700 now account for almost a quarter of the installed base of unlocked smartphones.”

So not only is the $400+ category growing, one specific sector is performing quite well. Knowing this, filtering gap intelligence’s data for unlocked smartphones priced between $500 and $700 reveals a tight collection of just 52 unique models in Q1 2019; a remarkably similar quantity compared to the 54 items that met the criteria last year and the 50 that did so in 2017. Looking at these product batches shows that Samsung is responsible for 52% of the unlocked smartphones priced between $500 and $700 in Q1 2019, up from 34% two years ago. Samsung moved from selling members of its Galaxy S6 and S7 generations as unlocked units in the price brand during 2017 to supplement its exposure with S8, S9, and S10 generation handsets this year, using its older models as additional alternatives for buyers.

So there it is, the playbook revealed more detail around the unlocked market, and it’s Samsung leading the charge. A rather unsurprising conclusion for our entrenched smartphone market in the US. We were able to gain answers to questions around sales results to give added context and depth on the subject of unlocked smartphones, which shows how complementary NPD and gap intelligence’s services really are. Using gap intelligence data, we could continue to narrow down the unlocked smartphone market trends by integrating our advertising and promotional information, but I’ll save the really advanced playbook stuff for another time.