Looking to Buy a Printer? Here’s Why You Should Wait a Few More Weeks.

Looking to Buy a Printer? Here’s Why You Should Wait a Few More Weeks.

If you’re in the market to buy a home printer, hold off a few weeks to take advantage of this year’s holiday deals. Black Friday promotions have already started to be revealed, and manufacturer strategies are showing a repeat of years past. As history repeats itself, shoppers can expect to see holiday-specific burst SKUs, an increase in advertisements (compared to non-holiday weeks), and deep discounts on printers as manufacturers and retailers compete for your business. Here’s an summary of the 2018 deals and what to expect for this upcoming shopping season. 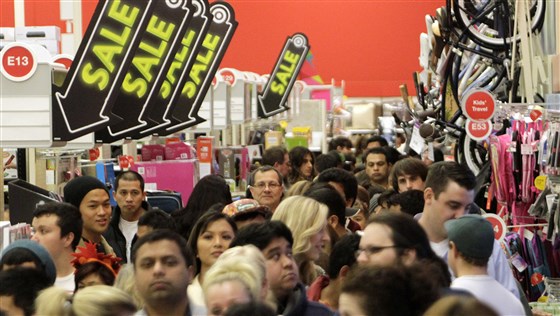 Each holiday shopping season, printer manufacturers introduce store-exclusive printers that are based on devices that you can find online and at most other retailers (the printers just have a slightly different name). These Black Friday-specific printer derivatives are often intended to sell as burst SKUs and are out of stock once inventory is depleted (so it’s suggested you move fast!). The products are relatively easy to spot, as they sell with unique product names and are often stacked up throughout stores.

Five holiday-intended burst SKUs were available in 2018, all of which were from HP (or branded as Samsung but owned by HP). The SKUs included the following:

Looking ahead, we expect similar offers for Black Friday this year. HP is expected to introduce BF-exclusive SKUs from its DeskJet and ENVY lines with $19 and/or $29 devices that are expected to be available at Best Buy, Walmart, and OSS chains. Canon is also expected to offer its own highly discounted options to rival HP’s promotions.

Best Buy, an always popular shopping location for Black Friday, published the third-highest number of advertisements, maintaining its ad feature count from 2017 at 10. The deals typically focus on printers that are intended for light use, so this may be a good option for customers who are in the market for a printer and already shopping in-store. Fry’s Electronics significantly reduced its ad count for the shopping period (-37%), while Walmart was the only merchant to increase its ad count in 2018 (though it only increased from three to four deals). Target and Sam’s Club each published a single advertisement in 2018, while BJ’s Wholesale Club and Costco both opted out of publishing Black Friday advertisements last year. 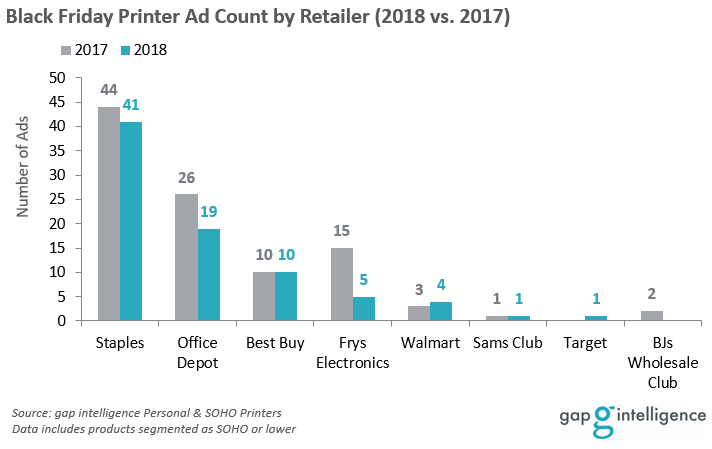 This year, the vast majority of deals are expected to be made available at the office supply store chains yet again. However, customers who are loyal shoppers at other retailers should take advantage of price match guarantees.

When shopping for a printer this holiday season, you’re going to see HP a lot. In 2018, the brand featured 32 printer ads, representing a decline of 18% compared to Black Friday 2017. HP also published a single ad feature for a Samsung-brand printer. As mentioned above, HP acquired Samsung’s printing technology two years ago. Brother once again had the second-highest ad count in 2018, maintaining the number of ad features versus 2017 at 22. Canon reduced its ad count by 33% to 12, and Epson reduced its ad count by 31% to 11. Meanwhile, Lexmark and Kodak were the only manufacturers to increase year-over-year ad count for Black Friday. However, these players only increased their visibility by a single ad, and Kodak no longer actively produces print hardware. 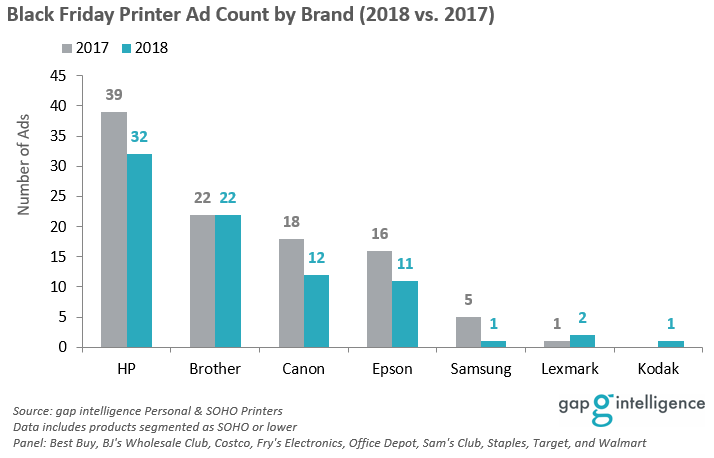 HP is expected to dominate Black Friday printer ad placements once again this year, likely using the high-demand shopping season to encourage shoppers to buy printers that have already been refreshed with new replacements. HP could also use the holiday to grow its user base of Instant Ink, a subscription-based service that provides customers with a monthly page allowance in exchange for a monthly service fee. Ink is monitored and delivered to customers when ink levels are deemed low, effectively reducing the cost of ink supplies while providing the convenience of ink delivery. With that, HP is likely to offer free Instant Ink subscriptions with the purchase of select devices, giving customers free ink for several months.

If you’re in the market to buy a printer for home use, you’d benefit from waiting a few weeks to take advantage of Black Friday deals and/or purchase a burst SKU at aggressively low prices. HP is expected to promote the most printer deals, especially at Staples and Office Depot, though instant savings offers will be widespread across merchants.