It is 2020, and the smartphone industry’s sights are set on 5G to drive the next arc of growth. We have all heard of this next-gen network roll out and been dazzled by promises of faster speeds and stronger connectivity to make life better. After nearly a full year, and now with all major US carriers participating, single digit 5G city counts have bloomed into double digits and network operators are boasting coverage for hundreds of millions of people. But to date, are you among those benefiting from this? How much 5G do we really have today? Perhaps more importantly, what events are driving 5G over the edge into mainstream?

Unofficial gap intelligence in-office polling shows a broad range of perception regarding the current progress of 5G. This speaks to a level of confusion surrounding who has 5G and where it is available, as well as what devices can tap into its swift capabilities (AT&T’s 5GE-branding for its 4G definitely tricked respondents). Estimates around our office ranged from a grim 1% up to an optimistic 37% regarding the current percentage of US cellular customers using 5G. While some survey responses beautifully reinforced the effectiveness of carriers’ masterful marketing, the gap intelligence office is full of realistic people, yielding 5% as the most common response, which is not far from our current reality.

Today, 5G smartphones account for 2% of the total products positioned in the retail channel for shoppers to see. The initial groundwork laid for this nascent market was handled by just a handful of entities, starting just one year ago, in April 2019, with Samsung. LG and OnePlus then joined to form an early 5G product landscape consisting of:

Verizon stands with the most robust 5G device assortment with all LG and Samsung models, the latter of which are additionally available inside Best Buy and warehouse club stores Costco and Sam’s Club. Sprint now has three 5G smartphones and T-Mobile has two, which gives OnePlus important exposure in the segment. Meanwhile AT&T focuses solely on presenting the highest-level Samsung, the Galaxy Note10+ 5G, to its customers.

Noting premium device pricing and limited expansion, current strategies for 5G are best aligned to early adopter tech-enthusiasts, and sales performance likely varies regionally based on network deployment. Retail sources indicate that 5G smartphones are estimated to be no higher than 2% or 4% of current device sales mixes. As such, gap intelligence is seeing the channel deliver a parallel amount of advertising expenditure for 5G-capable devices. 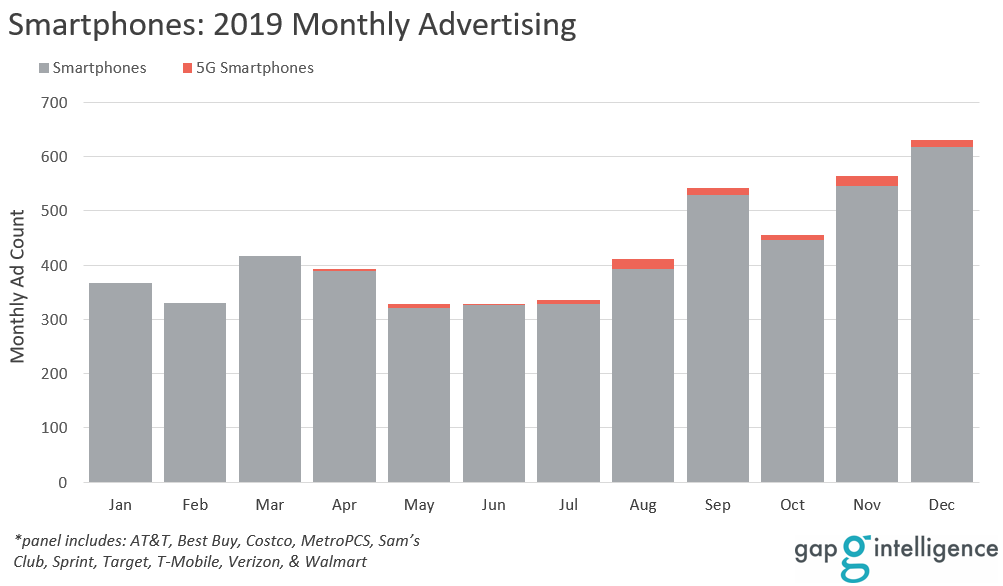 In the sea of smartphone advertising, promotions for 5G-enabled devices barely break the surface level. Since debuting in April 2019, 5G smartphones grew from 0.7% to 2.5% of total monthly advertising. Samsung rules overall 5G advertising with a dominant 81% share (all postpaid carriers & unlocked represented), while LG and OnePlus make up the remaining 10% and 9%, respectively (only Sprint & T-Mobile). 5G marketing efforts peaked in August 2019 at a 5% share, driven by the launch of Samsung’s Galaxy Note10+ 5G. That flagship device alone made up made up 37% of the period’s total 5G advertising, a key factor as we look into our immediate future.

5G Began with, and Grows with Samsung

As Samsung delivered the first 5G hardware to the US last spring, so shall it drive the market’s next wave of expansion. This spring cycle brings a full year of maturity to the 5G smartphone segment, and the single 5G member of the Galaxy S10 generation has grown into a full lineup of 5G capable models: the Galaxy S20, Galaxy S20+, and Galaxy S20 Ultra ($1,000 – $1,600). With support for 5G built-in, and imminent availability (March 6, 2020), the new introductions will dramatically lift the overall presence of 5G hardware and drive an associated rise marketing devoted to the next-gen network. The Galaxy S20 generation will be responsible for elevating awareness and driving the first solid sales results for the 5G realm. Members of the Galaxy S20 generation will again be among the most popular Android phones this year and will define Samsung’s presence in the high-end segment, all the while reinforcing 5G.

Every year, Samsung’s reigning S-series smartphones make up around 30% of the advertising captured each month, and rise to an average share closer to 40% during launch periods (typical Q1/Q2 timing). By this pattern, 5G enabled Galaxy S20 models are set to bring the next-gen network to the forefront of advertising, and early pre-registration and pre-order promotions are doing exactly that. Backed by the new generation, 5G advertising accounts for 27% of the ads tracked this month, and is expected to remain just as visible in the near-term. The immediate future ahead for 5G belongs to Samsung again. 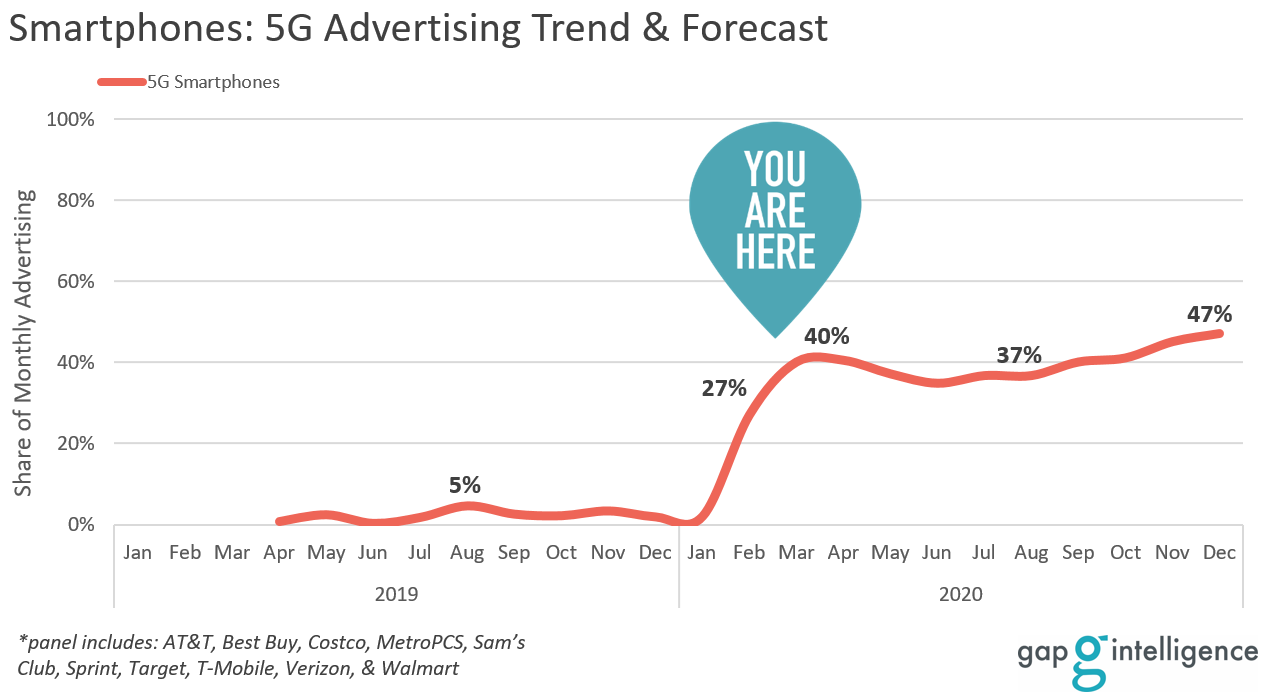 Since debut and into the foreseeable future, Samsung is the brand leading the overall momentum in 5G, but other growth is on the horizon. According to the CTA, 5G hardware is predicted to be 12% of total smartphone sales in 2020, a steep climb from current 2% estimates, which requires the pace of other brands’ participation to intensify as well. The future stands to benefit most from 5G spreading beyond flagship price points and into mid-tier segments for mainstream popularity.

Pricing will soon come down, enabled initially by chipmaker Qualcomm and its prevalent Snapdragon processors, a mainstay for most Android hardware. All current 5G smartphones employ flagship-class Snapdragon 800-series processors, but Qualcomm is integrating 5G modems into its mid-range 600- and 700-series chipsets to lower the threshold for future buyers. This upcoming affordable range of 5G devices will widen sales accordingly and provide opportunity for brands to expand involvement. The market today, however, is shaped by a handful of top-tier models, and under Samsung’s direct control.