The End of an Era: HP Discontinuing A3 and A4 PageWide Lines

The End of an Era: HP Discontinuing A3 and A4 PageWide Lines

HP will be officially discontinuing its A4 and A3 PageWide business inkjets at the end of its fiscal year on October 31, 2021. It’s fair to say that the news came as a complete shock to the industry given that PageWide has been a major pillar of HP’s strategy to grow share in office environments since the company’s official unveiling of the line almost exactly nine years earlier.

Before it was called PageWide, HP introduced its Officejet Pro X (OJPX) lineup on October 30, 2012. The first-generation line began shipping into US channels three months later with a compelling value proposition that featured messaging of “twice the speed at up to half the cost compared with color lasers.” HP’s flagship Officejet Pro X576dw was even certified by Guinness World Records as the record holder for the fastest time to print 500 sheets by an office color desktop printer. The Guinness World Record earned HP an attention-grabbing headline as the “Fastest Desktop Color Printer” for its first generation of OJPX devices, driving awareness of the new series. HP also led with eco-friendly energy and waste-saving features, quiet operation, and low device interventions achieved through high ink yields and large paper capacities. The features and headlines were designed to help change common channel mindsets and end-user perceptions that laser was superior and more suitable than inkjet in office settings. 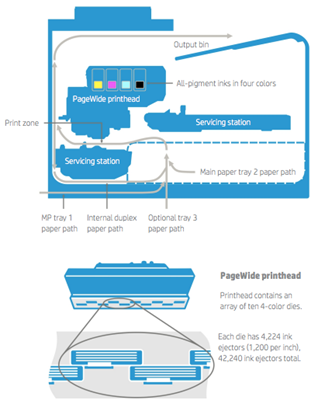 But What About LaserJet?

HP made every effort to move units of its strategically important business inkjet series. Several of its marketing tactics are shown below. 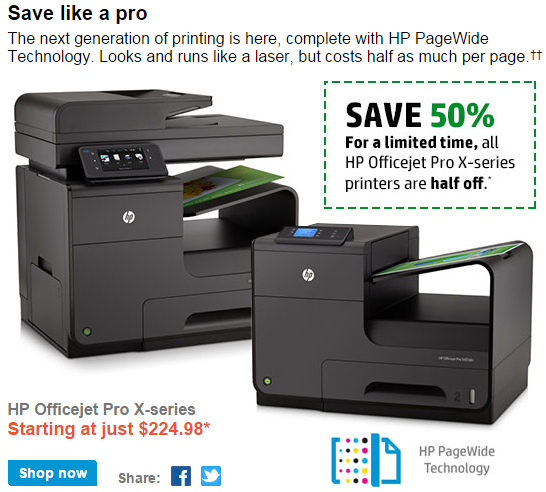 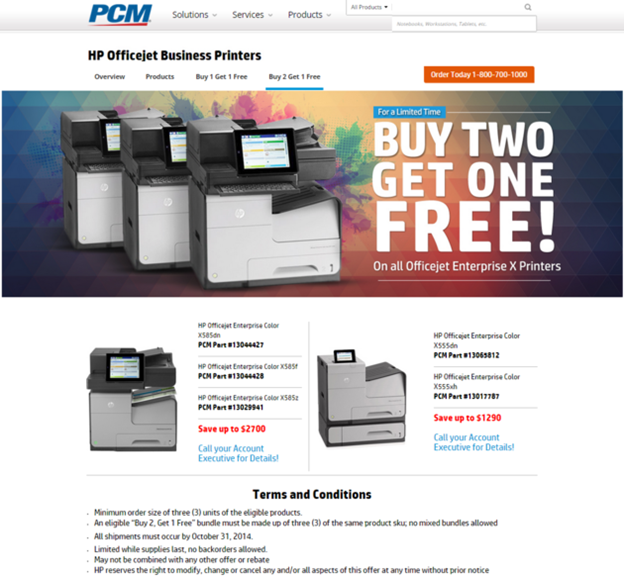 In addition to the above marketing efforts, HP was known to employ a range of channel-wide incentives that would reduce the hardware acquisition price of its BIJ line. At times, HP would offer more of these instant savings incentives on its BIJ SKUs than its LaserJets. 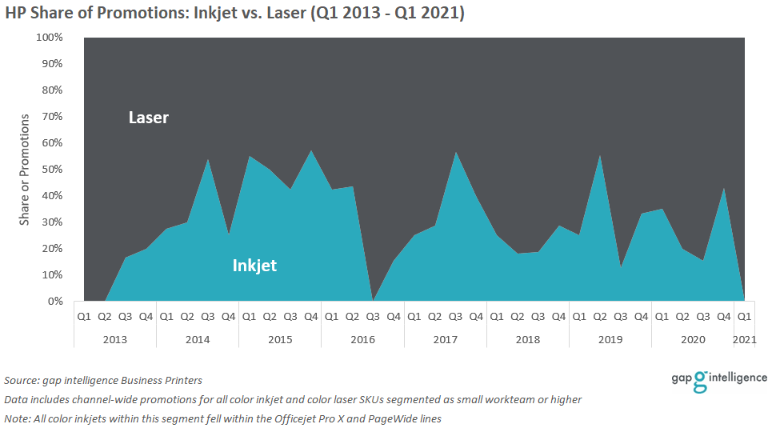 The incentives assisted in HP’s efforts to move units, enabling the company to report impressive growth stats, but many wondered if PageWide’s growth came at the expense of its LaserJet portfolio. In short, HP wasn’t worried if its PageWide line cannibalized its LaserJet business – a win was a win. HP highlighted the importance of a balanced portfolio comprised of its LaserJet and PageWide devices. In support of the positive impact of its shared portfolio, HP claimed that its combined LaserJet and PageWide share in the A4 small workteam segment increased by 23 percentage points to 58% between Q1 2013 and Q1 2016.

HP addressed portfolio overlap concerns between the two lineups, stating that LaserJet and PageWide devices have different value propositions and that the technologies often target different customer needs. HP noted that it positioned LaserJet for higher-quality output (previously stated as “Print Shop Qualify”), while its PageWide devices lead with low running cost and offer “professional everyday document quality.” Despite the differences, HP’s those who were most concerned with the running costs of printing would view PageWide as the clear winner.

Months after HP released its initial OJPX lineup, the company introduced new products that expanded its business inkjet portfolio upmarket. At the time, HP’s BIJ portfolio remained limited to transactional channels (i.e. retail and ecommerce), but the company made it abundantly clear that the OJPX series would gain availability in closed channels with the introduction of Managed configurations that only its dealer partners could sell. 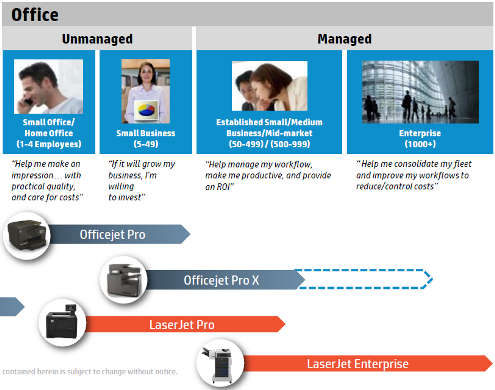 In 2016, HP revamped its office inkjet offering with the introduction of the PageWide branding that helped differentiate the line from HP’s OfficeJet Pro series for SOHO users and to better highlight PageWide’s use of page-wide array print head technology that measures the entire width of the page.

The launch and rebranding were held in tandem with HP’s major push to drive sales within the contractual space with its release of the first A3 PageWide-based models. The launch was part of HP’s efforts to grow share within A3 segments while leveraging its PageWide technology to differentiate its portfolio amidst a somewhat saturated laser-based market. As noted above, the value proposition was designed to help partners grow color unit sales (with low-cost color printing) by emphasizing reduced service needs with fewer supplies interventions and replaceable parts, along with higher margins – all the while leading with PageWide’s trademark lower hardware prices and CPPs and similar (or better) level of functionality vs. color lasers.

Over the next several years, HP continued to introduce A3 PageWide devices for its dealer network. HP did this while juggling efforts to grow share of its A3 LaserJet line with its newly acquired Samsung technology and channel. Having an A3 LaserJet lineup was a favorable decision for HP since laser bias tends to get stronger the higher you move upmarket.

Laser bias, this perception that laser is the more appropriate technology for office print settings, was ultimately one of HP’s – or any manufacturer trying to gain share in B2B environments using inkjet technology – largest challenges.

One Brand’s Exit is Another Brand’s Opportunity

Although not explicitly cited as a reason for its BIJ exit, laser bias continues to play a role in any brand’s efforts to grow inkjet adoption in office environments. HP stated that its decision to discontinue the series was based on ongoing advancements made in overall performance, quality, and reduced total cost of ownership within its LaserJet lineup. The latest LaserJet updates have focused on enhanced security, increased productivity, and improved manageability while maintaining a commitment to sustainability efforts. According to HP, the following LaserJet enhancements have been achieved over the course of the last decade:

What does HP’s BIJ Exit Mean for the Industry?

Epson is a clear top-of-mind winner here as HP’s exit from business inkjet segments paves the way for the Japan-based OEM to continue its own efforts to displace lasers, without a direct competitor in its way. Epson remains focused on and continues to develop its go-to-market strategy centered around efforts to penetrate office environments with its own inkjet technology, which it describes as “Heat Free” and with a “linehead” array of print heads that span across a page. With HP’s departure, Epson will become the leader in the business inkjet market but will continue to face the same market perception challenges that HP has encountered with its own PageWide lines.

Canon will also be a clear winner. Not because of its own BIJ lineup, but because HP’s exit out of PageWide increases its dependence on Canon. HP sources laser technology from Canon to fuel its wildly successful LaserJet portfolio of A4 printers and MFPs. (HP’s A3 LaserJet Managed lineup leverages engine technology acquired from Samsung’s printing business.)

For end-users who were big fans of PageWide A3s and A4s, it’s obvious that replacement SKUs for existing models will not be launched. Customers looking for an upgrade will either pivot back to owning LaserJets (or laser-based products from other manufacturers) or seek business inkjets from other brands.