Wheeling and (Daily) Dealing: A Retrospective

Wheeling and (Daily) Dealing: A Retrospective

Almost exactly two years ago, I wrote a blog introducing our readers to a then-new service offering that gap intelligence was getting set to launch, the tracking and collecting of BestBuy.com Deal of the Day promotional data. At the time, we were super excited to be able to offer our clients more visibility into what was quickly becoming a significant market driver in the consumer electronics space, but we had no idea exactly how much we’d actually capture. Well, in the time that has passed since, we have collected a total of 1,777 promotions (and counting), snapped countless online images, and expanded the number of product categories included in our tracking from 17 to 26! So I guess you could say that when it comes to daily deals, we got more than we “bargained” for! Ba-dum-cha…

At any rate, I thought it would be interesting to commemorate this two-year milestone by digging into the data a little bit to see how it all broke down over the time span. They say a picture is worth a thousand words, so I created 4,000 words’ worth to give you fine readers far less to read… and me less to write. That said, let’s jump right into them then, shall we? The first thing I wanted to look at was just which product categories were the most widely offered through BestBuy.com’s Deal of the Day promotions. Not surprisingly, TVs accounted for nearly 25% of all daily deals we recorded over the two-year period, furthering the notion that they’re still arguably the most popular consumer electronics product category out there. Rounding out the top five were notebook computers, smartphones, vacuum cleaners, tablets/detachable 2-in-1s, and smart wrist wearables, with the majority of remaining categories comprising less than 1% of all Deal of the Day promos recorded. Incidentally, the ever-popular headphones category would have probably come in at a much higher clip had we collected a full two years of data for it. However, our headphones service was only launched earlier this year, making it one of the 9 additional categories added to our Deal of the Day tracking service since its inception. Still, 3.6% of all deals we’ve processed thus far equates to 64 individual headphones promos in just 7 months’ time, which is certainly nothing to tune out.

What Brands Are We “Deal”-ing With? 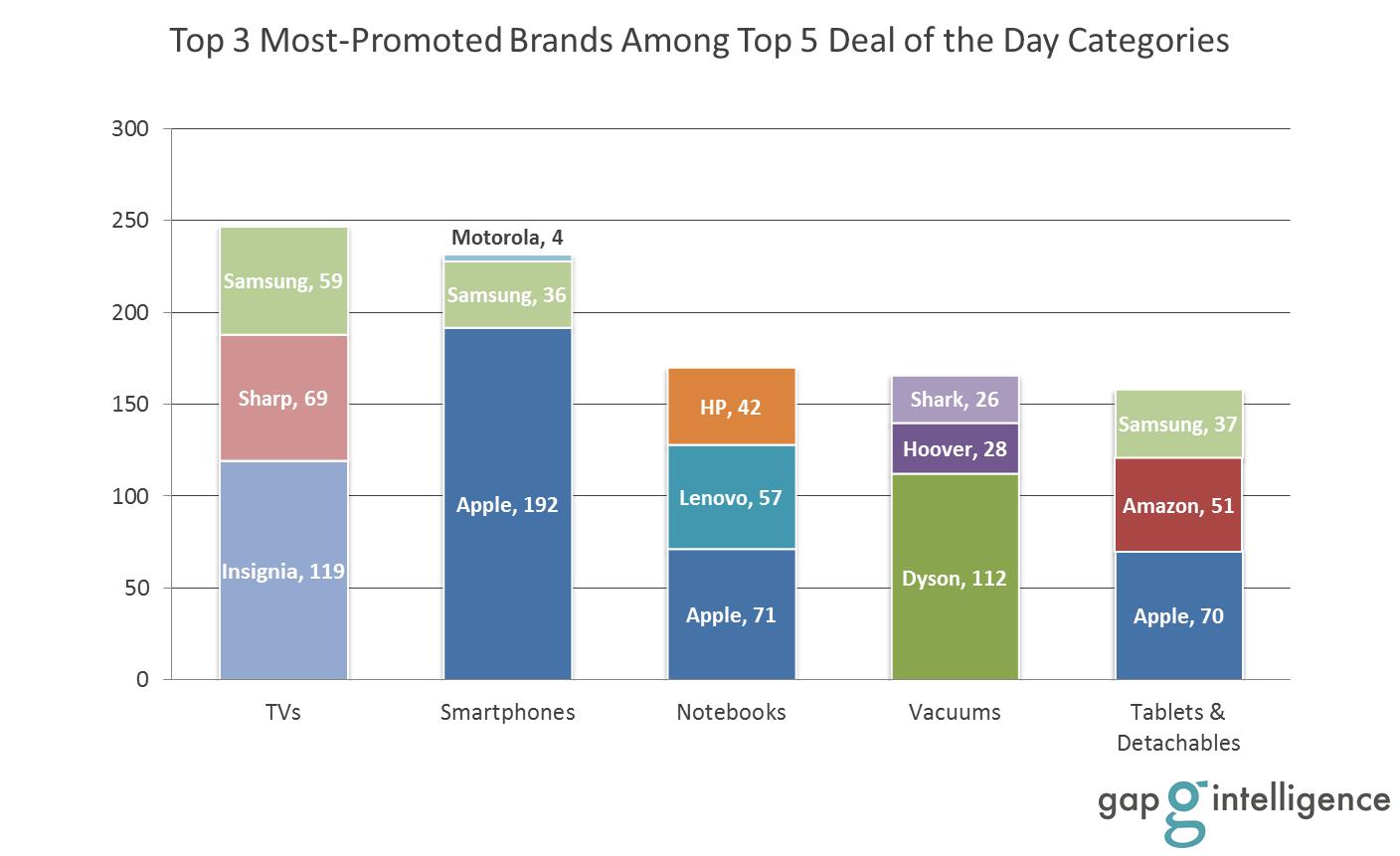 Piggybacking on the previous chart, I wanted to see how brand distribution broke down among the top five most widely promoted Deal of the Day product categories. However, among just those five categories, there were almost 40 unique brands represented over the course of two years, which would make for a pretty messy chart. So instead, I opted to narrow the focus down to just the top three most-promoted brands for each of the top five categories. Leading with TVs again, it doesn’t come as a huge surprise that Insignia, Best Buy’s own in-house brand, comprised almost twice as many BestBuy.com Deals of the Day as the other top two brands combined. Apple and Samsung also demonstrated strong daily deal brand visibility, positioning themselves in the top three standings of three different top product categories apiece.

Even Promotions Have a Type 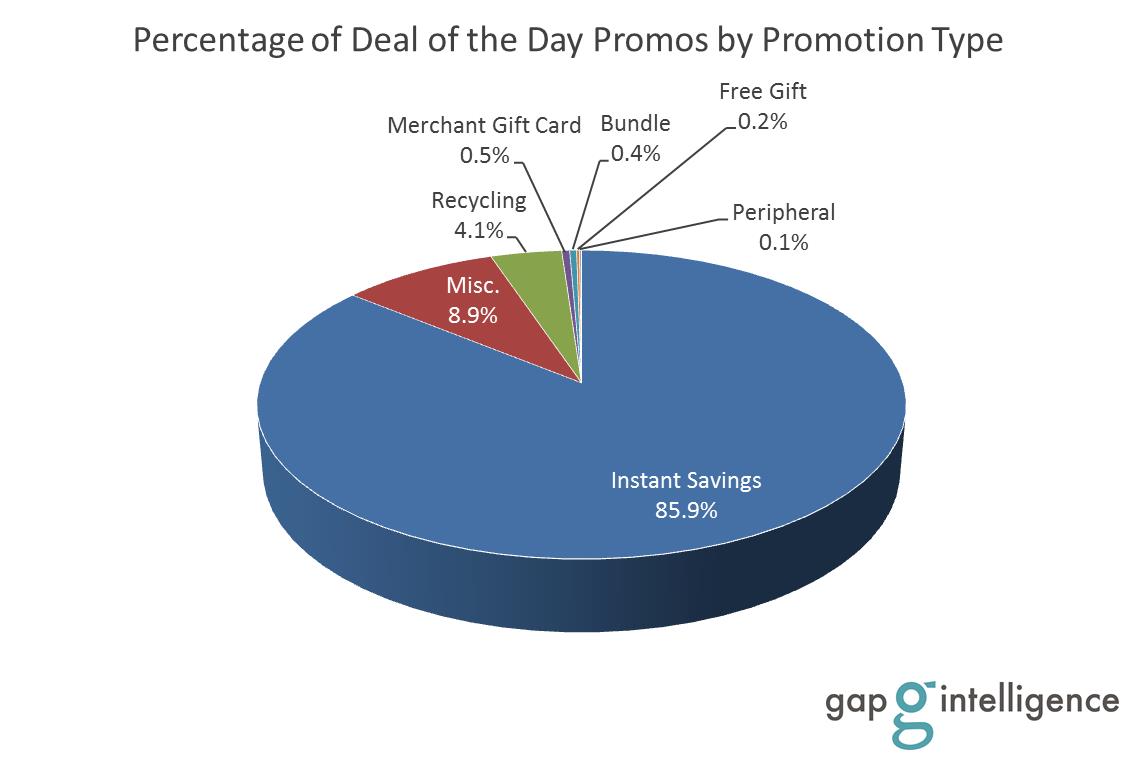 The next thing I wanted to look at was the promotion types that were offered through BestBuy.com Deals of the Day over the last two years. Unsurprisingly, basic instant savings promotions were overwhelmingly the most common, accounting for nearly 90% of all the promos we collected. Interestingly though, miscellaneous promotions (8.9%) took the second spot, due in large part to over 200 smartphones monthly bill credit offers dominated by Apple, and to a lesser extent, Samsung products. Recycling promotions were similarly driven by smartphones, as Apple offered a $225 trade-in savings on over 70 iPhone models in just one day last December.

So What’s the Big Deal? 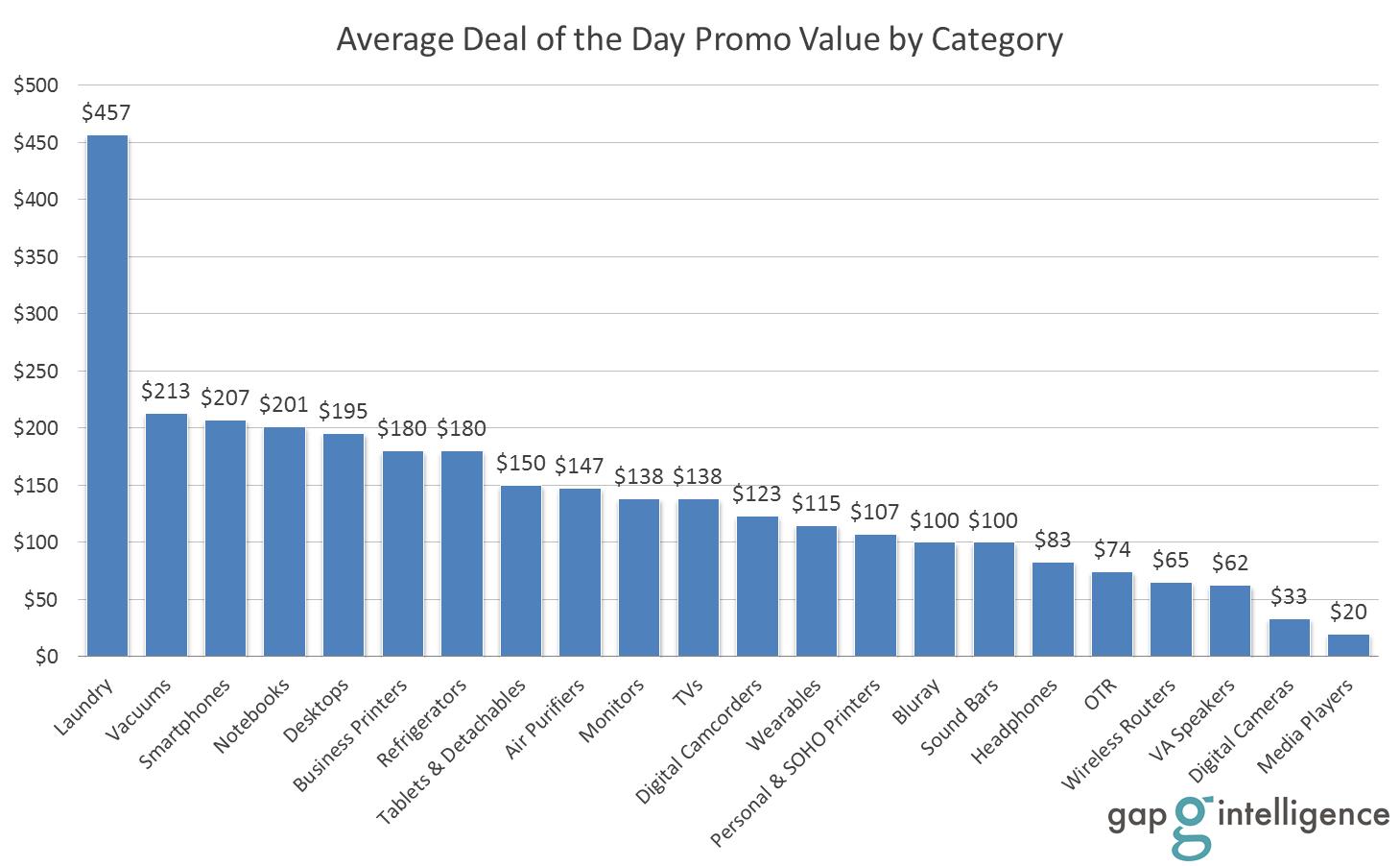 Obviously as a consumer though, the thing that probably matters most to you with any sort of short-term deal is how much money you’ll actually save, so I decided to plot out the average savings of all BestBuy.com Deal of the Day promos over the last two years by category. The first thing that stands out is the average savings for laundry appliances compared to all other product types. At more than twice the value of the next closest category, one might think that holding out for a BestBuy.com daily deal is the way to go when planning to purchase a new washer or dryer. However, first it’s important to remember that appliances are expensive to begin with, so any promotional savings are naturally greater as well. Furthermore, if you refer back to my first chart, you’ll remember that laundry products had < 1% share of all daily deal promos collected over the two-year span, or the equivalent of nine total Samsung deals that all occurred over just two days in January of this year. So if you’ve got a bunch of dirty clothes piling up because you’re waiting for the next big deal to hit, you may want to look elsewhere.

Looking at the top five most-promoted products categories, however, it’s interesting to note that four of the five appear in the upper-half of most aggressive promo values (ranging from roughly $140-$210), with only smart wrist wearables showing up in the lower one. That means that many of the product types that are most widely available through BestBuy.com’s Deals of the Day are also among those with the greatest overall savings. So if you’re in the market for a vacuum cleaner in the near future, for example, you may want to keep an eye on BestBuy.com. As a matter of fact, just for kicks I wandered over there myself just now and sure enough, there’s a pretty nice Dyson on sale this week for $300 off, a total savings of 50%! Here’s your proof!

So as you can see, when you start digging into the Deal of the Day data, you can actually find some pretty interesting stuff. It is my hope that this blog has helped further illustrate just why these daily deals have become so important to product manufacturers, and subsequently why we wanted to collect them each day in the first place! At gap intelligence, we’re all about providing value to our clients, and given that the combined value of all the BestBuy.com Deal of the Day promos we collected over the last two years comes to a whopping total of $202,473, I’d say we definitely held up our end of the “deal!”