Why Financial Growth Does Not Equate to Success for Print Industry Manufacturers, Just Yet…

Why Financial Growth Does Not Equate to Success for Print Industry Manufacturers, Just Yet…

The print industry calendar Q2 earnings session officially wrapped up with nearly all print manufacturers posting double-digit revenue growth year-over-year. This seemingly major accomplishment, however, doesn’t mean the industry’s fully out of the COVID-19 woods just yet. Profitability still remains challenged and the YoY comparisons aren’t necessarily apples-to-apples given that the economy was at a standstill this time last year as the pandemic brought lockdowns and vacant offices. Now, 18 months since the pandemic was declared, people are returning to the office, bringing hope to an industry that was significantly impacted by COVID-related declines.

Before diving into the most recent quarter, it’s important to provide a snapshot of each major player’s financial positioning and how the manufacturers performed annually last year. In 2020, HP was the largest vendor with respect to total sales with its Printing and Personal Systems segments comprising the entirely of its overall revenue. Although some may argue that HP is not diversified enough to combat ongoing market challenges and declining page volumes in the print segment from a long-term perspective, HP already executed a split forming HP Inc. (HP) and Hewlett Packard Enterprise (HPE) several years ago, a move that was designed to streamline operations, better align the companies’ units for future growth, and promote agility. 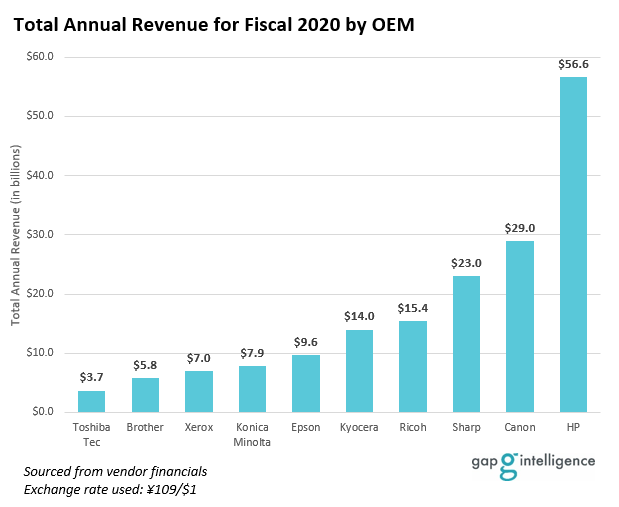 Of the OEMs, many of which have widely diversified portfolios within healthcare and industrial sectors, Sharp posted a 6.8% YoY increase in revenue compared to 2019, marking the only vendor to report sales growth in 2020. One of the smaller print OEMs by revenue, Brother, reported nearly flat revenue in 2020 versus the year prior, due to stronger demand for low-end printers and home sewing machines. HP was also well-positioned to capitalize on COVID-19-driven trends amid high demand for entry-level computers and printers, releasing new A4-sized devices to support the market. The vendor’s strategies helped it minimize the YoY revenue loss, which was roughly -4% compared to 2019 – and in a similar range of losses reported by Epson and Kyocera.

Operating profit was also challenged during 2020 with both Konica Minolta and Ricoh posting an operating profit loss for the full-year, which is generally very rare and hasn’t happened in recent memory. Although the remainder of the OEMs reported positive operating profit margins, the figures were certainly lower than what was reported in 2019, confirming that COVID-19-negatively impacted profitability last year. 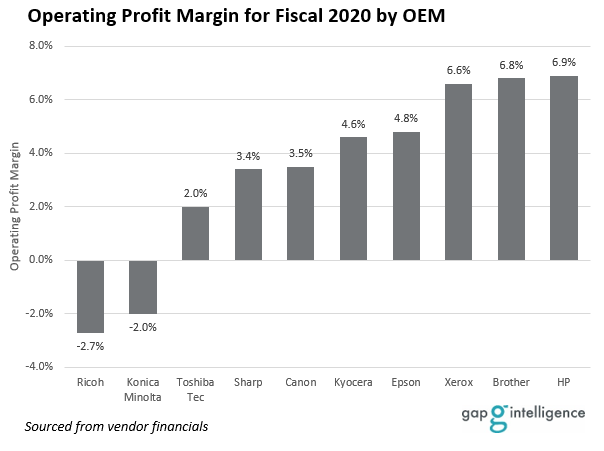 While HP, Brother, and Epson took advantage of the market shifts last year as more people shopped for home printers online, most of the other print manufacturers struggled to overcome the major double-digit declines in printing revenue as some implemented organizational restructuring initiatives in an effort to refocus strategies, reduce operating costs, and offset the near immediate halt to print volumes and contract renewals.

Have OEMs Bounced Back?

Looking at the most recent financial results posted by major print manufacturers, YoY revenue has improved by an average 27% among the vendors with print specific revenue up an average 30% YoY. (Toshiba Tec and Sharp don’t outwardly report their print revenue, so they are not represented in the chart below and Xerox is essentially 100% print.)

During a normal year, this quarterly performance would be viewed as strong, however this year is largely an exception as the previous year marked one of the worst financial periods in print industry history (likely a close second to the recession in 2008).

During calendar Q2, manufacturers experienced print revenue growth primarily due to increased sales of printers and MFPs as employees gradually returned to the office and more people printed. While the financial figures suggest that the vendors have fully recovered from the significant declines reported last year, the future office landscape remains uncertain as geographic regions continue to battle rising COVID cases and new variants, which are contributing to supply chain constraints. On the bright side, the continued rollout of vaccinations is driving progress in device sales/print volumes translating to more steady overall revenue and profit growth. 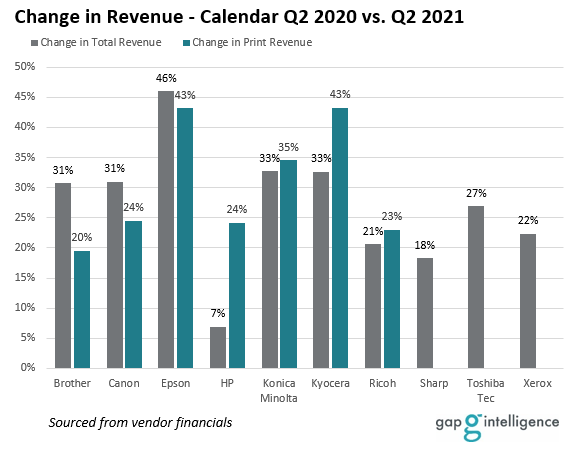 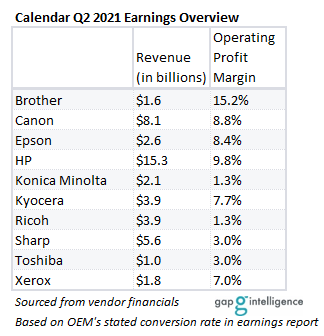 In addition to revenue, profitability is a critical component of the earnings statements that OEMs have struggled with over the past year. The positive uptick in profit margins certainly marks an improvement from reported losses one year ago, but from a financial perspective, margins should be higher and ideally closer to the 10-15% range like Brother and Xerox typically were pre-COVID.

The Future Will Bring Some Changes

Uncertainty lingers as to if/when companies will fully return to the office, but the landscape has forced (and accelerated the need for) print manufacturers to evaluate their strategies, streamline operational redundancies/costs, and adapt their portfolios to market changes. These measures should enable the OEMs to bounce back more quickly and achieve improved financial balance.

Looking ahead, more manufacturers will look to expand their offerings in the managed services area in an effort to offset declining page volumes and MFP/consumables sales. Ricoh and Konica Minolta, along with Xerox, which just launched its CareAR software business, are exploring new ways to capitalize on helping customers with a services-focused approach.

While incremental declines in sales and page volumes are expected for the foreseeable future, continuing the visible trend from the last few decades, a near-term recovery from the steep COVID sales drops is expected to bring the office print business back to near 2019 levels likely by 2022. In the long-term, however, the highly competitive (and over saturated) market with arguably too many OEMs competing for share will put additional pressure on print segments likely forcing vendor consolidation. The elimination of even a few of the OEMs will relax the intensity of the market and allow vendors to combine similar or complementing strategies. However, as the industry (and rumor mill) patiently awaits the M&A activity, Fujifilm is preparing its entrance into western markets, starting with Europe in the coming months, adding more pressure to the channel.

Lastly, the hybrid workforce has changed how people work, collaborate, and share/store information. This will play a role in future OEM strategies, how they approach the market, and possibly impact the financial stability of their printing businesses. Combined with declining print volumes, it will be necessary for the manufacturers to continue to look for new revenue opportunities outside of and adjacent to print, while adapting their print hardware portfolios (potentially shifting their focus away from A3-sized MFPs) to support the changing workforce.