With Demise of Another TV Brand, What Does the Future Hold?

With Demise of Another TV Brand, What Does the Future Hold?

The pace of innovation in technology moves quickly, and sometimes evolution seems so inevitable that by the time we adopt a new device it seems almost like a forgone conclusion. Most of us remember the transition from cassette tapes to CDs to digital audio, which happened swiftly and was very disruptive. But sometimes the changes are not as apparent to everyday consumers, as is the case when brands leave the market for one reason or another. If you’re only a casual observer of the television market, you may not have noticed that several brands have left store shelves over the past several years. Most recently, small TV brand Haier decided to call it quits so I took a trip down memory lane to look at other brands that have made similar moves over the past few years. 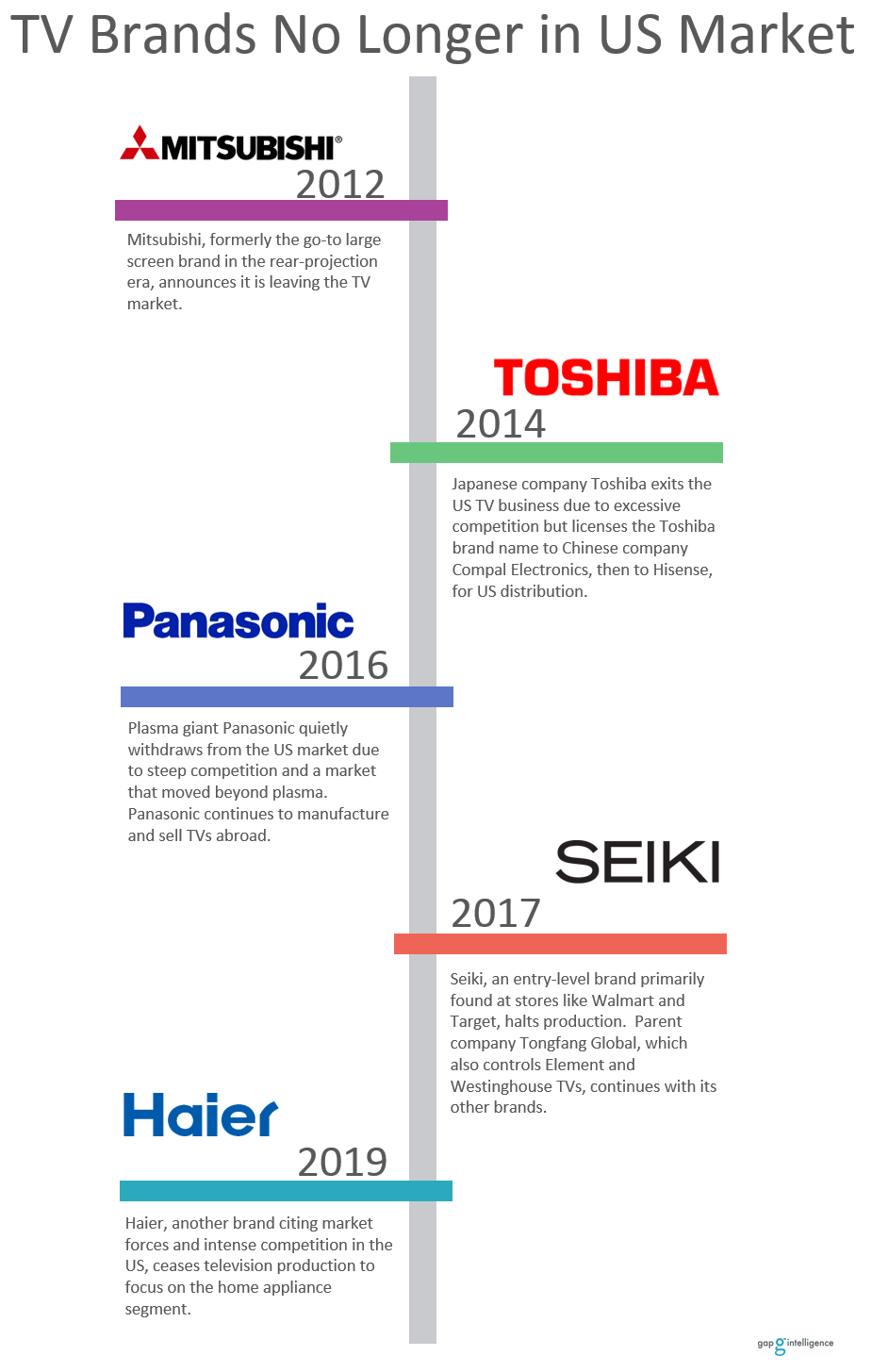 Effects on the Companies

As you can see, the list includes some well-known brand names as well as some smaller players in the market. (And technically, Toshiba-branded TVs are available again, although under a new licensing deal.) And while individual reasons for leaving the US market varied between companies, the primary issue generally boils down to one of competition: brands were not able to compete profitably for one reason or another.

For the larger brands, such as Mitsubishi and Panasonic, the inability to compete related directly back to the pace of innovation in the television space. Mitsubishi chose to focus its attention on rear-projection products while the rest of the market (and all of the consumers) moved to flat-panel LCD displays. Panasonic faced similar troubles by the time it chose to leave the US market due to its reliance on plasma TVs over LCD, and its inability to develop affordable OLED displays quickly enough to prevent its exit. The smaller brands on the list tended to face the issue of too much competition in a crowded market, which left little room for profits without selling massive volumes of products. The ability of any one manufacturer to sell a large number of TVs is difficult when there are too many brands to choose from.

Effects on the Market

With so many brands disappearing from the US market, does that mean that consumers have fewer choices? Actually, yes. As you can see in the chart below, the number of available brands sold at the largest national merchants has dropped by 30% over the past six years with a 46% decline in 2017. A few brands are gone for good, while other brands struggle to maintain expensive retail presence and move to smaller retailers or focus their efforts online. The increases are simply a matter of established smaller brands (Polaroid, JVC, RCA) regaining one or two retail spots that had previously been lost. 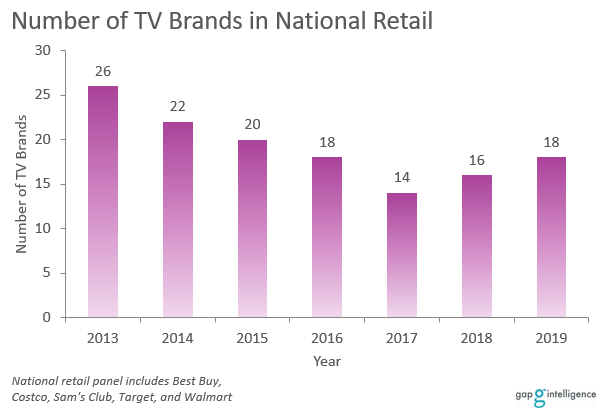 Because of the crowded and competitive TV market, it is very difficult for new players to break into the space. The most recent entrant comes from Onn TVs, Walmart’s house brand, which focus on low-price, entry-level models that will not have a major impact on the premium market.

Given the pace of change in consumer electronics paired with the highly competitive nature of the TV market, the list of available brands is not expected to grow, and may continue to shrink. It would take the efforts of an established brand with deep pockets and staying power to join the market in any meaningful way. Although who knows? Perhaps a company like Facebook, Amazon, or Google will decide to turn its line of voice assistant display devices into large-screen home entertainment hubs. With that as a possibility, the future of the TV market could look very different indeed.